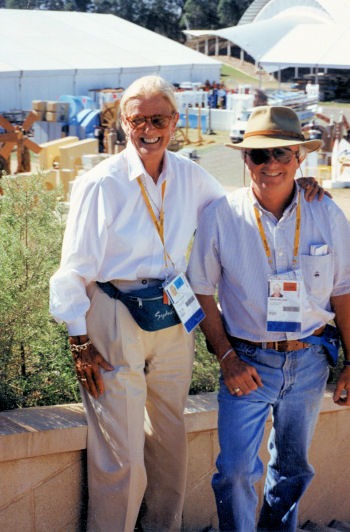 In my era there only was one level of Rally - the idea started by Billie and Churchill Mann in 1948. I was there!!! and at others following in Ontario

I did not compete Internationally as a rider. I believe in my era the emphasis was on the male side with a few exceptions such as Jane Holbrook. This is why I pursued the officials side for my involvement.

With the realization -as stated above- that if I wanted to be involved at the International level very soon after I graduated from Pony Club I started learning about judging hunters, jumpers and equitation and held my senior card in these for many years.

And then for me a great new category of official was established by the CEF[EC now]Steward. It seemed that as competitions and prize money increased there needed to be a way to enforce the rules and maintain a level playing Field. "Right down my alley" I started right from the beginning -represented stewards on the CEF officials committee and eventually it was a separate committee I was the first chair had a great cross Canada committee - many Pony Club alumnae were included. And we moved forward.

Then The FEI developed their Steward program and I was the first FEI Steward General for Canada and our committee established FEI stewarding in Canada.

I have given FEI stewarding clinics in the USA, Mexico, New Zealand and Australia, as well as in Canada. I have been overall Chief steward at the Royal Winter Fair for many years.

Each year as a fund raiser for the Eglinton Pony Club, the club held Junior A horse show and all the Pony Clubbers ran it from start to finish. From the beginning Adele Rockwell showed us the way and left us alone to get the job done. She had complete trust in us and our ability. From that point on I have spent a lifetime of volunteering and trying to give back.

I have been chair of many Community Boards such as United Way of York Region, Kinark Child and Family services and The Aurora Agricultural Society among many others.

The friends I made in Pony Club are still my best friends today. Adele Rockwell was my mentor and friend. She had a magic way of treating us the same - no favourites. We were always a team and she was one of us. When she died I donated a Welsh pony driving trophy in her memory at the Royal, and each year, when it is presented, all the memories come flowing back.

I really believe if I had not had the Pony Club experience I would be quite a different person today and I really just want to say thank you for keeping the spirit going.

It goes without saying I have always had horses and ponies in my Barn, and thanks to Pony Club I know how to look after them.