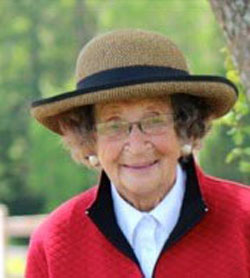 Maylea Manning's Pony Club 'career' began as a parent with the Charlottetown & Area Pony Club. She later went on the become District Commissioner for the branch, Regional co- chair and National Director for the NB/PEI Region.

Maylea always served Pony Club with a positive and energetic character, working tirelessly to ensure that every child she got involved in Pony Club was able to participate whether they needed a horse to ride or access to equipment and trailering.

She encouraged and helped children and parents alike, never wavering in her dedication.

Maylea was steadfast and unflagging in her efforts. Without her drive, many youth and equestrians would not have the resources they needed to participate and succeed.