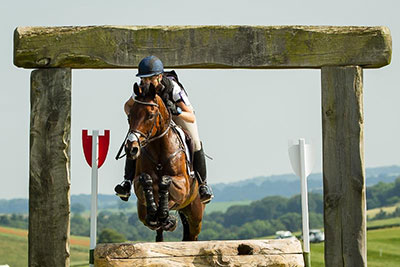 Every time Rebecca returns to Canada, she holds lectures for local pony club branches. She also offers eventing lessons to pony clubbers at a reduced rate. Rebecca's mother and sister also provide stable management lessons free of charge as a way to give back to Pony Club.

Raised in Salmon Arm, BC, Rebecca migrated to the Eastern United States in 2001 to work with many of North America's eventing greats. She has been a listed rider with the Canadian High Performance Event Program for the past decade. Some of her key accomplishments include:

Rebecca's results with Riddle Master have seen the Canadian-owned Sport Horse steadily climb in FEI World Rankings. Riddle Master is currently ranked as the 13th most competitive event horse in the world. 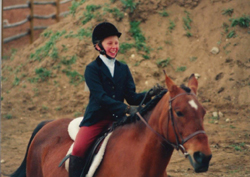 Rebecca was the professional rider for Fork Stables, North Carolina from December 2006 - June 2012. Her business background also includes three years of importing and marketing Irish and Argentine event horses for Dunlavin Eventing (Virginia, USA), as well as being one of the founding organizers (with Sinead Halpin and Dana Voorhees) behind Derbycross - a showcase hybrid of North American Eventing.

Prior to her move to England, Rebecca was one of the Canadian Elite Riders Association's rider reps and a Rider Advisory Board member for the Professional Riders Organization.

Camps! Definitely the camps. We had some great times at Long House in Lumby or White Lake (Pam Shaw) with some wonderful coaches (Robin Hahn).

I remember cross country schooling two levels above what I was competing at, swimming with the horses in the Shuswap River and hanging out with my friends and sisters which usually resulted in lots of late nights and early mornings. Many of my memories involve cleaning tack, sleeping in horse trailers, hand grazing in the moonlight and riding different horses.