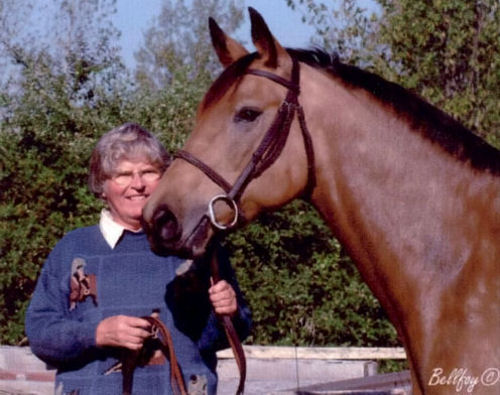 APPROXIMATE DATES OF MEMBERSHIP: FROM 1950-58

I became involved again with Pony Club when my children joined the Ottawa Valley Hunt Branch in the mid 1970s. Here I became a typical Pony Club Mum, helping whenever and wherever needed. Later I became involved with Testing, eventually becoming Testing Chair. I also ran Pony Club supplies in the early to mid 1980s.

I had also been involved with running a number of Pony Club events and Rallies during the late 2970s and during the 1980s.

I have given clinics on a number of subjects. Having run a consignment tack shop for some years, I always had some very interesting equipment to use as examples of both good and bad articles!

At present, I am a Visiting Commissioner for thee SLOV Region and am always willing to help out where necessary when I am able.

I have been an Equine Canada General Steward for about 25 years and during that time have done numerous shows in many disciplines.

The highlight for me was to be invited to be a member of the Stewarding team for Dressage at the World Cup in Las Vegas in 2007. This was a very valuable experience.

I am still very active as Chief Steward for the Equivalents Dressage shows held in Ottawa and Blainville and continue to enjoy my local Equine Canada shows at all levels.

For some years, I ran a small consignment tack shop which served many Pony Club members. My experience from Pony Club in my childhood certainly gave me a lot of knowledge in tack fitting and care. It taught me to distinguish good from poor quality and this proved invaluable. Hopefully, I was able to pass on those information to my clients. I an happy to say I was many times able to correctly outfit a youngster for a Pony Club Rally or Test at a reasonable cost (other than a helmet which had to be purchased new). For this I had many grateful parents. It was very satisfying when a young Pony Clubber would come back to the store to tell me how the testing/rally/event had gone.

I have many favourite memories, but as a Steward, I feel very proud to have watched some of our Canadian team members as well as some of our first class juniors go through Pony Club and reach the heights they have attained. I have dealt with tears of happiness and sadness with many of the competitors (both young and not so young) at competitions at all levels! I am pleased to say that generally ex-Pony Clubbers are good and fair competitors.